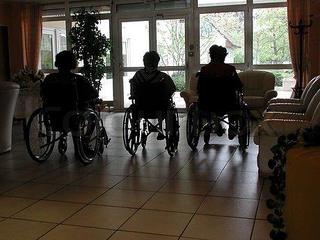 Let’s face it. Today most of the world is obsessed with ownership. We love to discuss our lives, our cars, our homes, our children, our jobs, our electronics and numerous other belongings. In most cases, we lovingly refer to all of these things as ours, throwing up the word “my” in some instances.If you listen closely enough, you will hear the word “my” used very often in the long term care world. If you hang around a skilled nursing facility any length of time, you will hear the term “my resident” used. Sometimes you may even hear it taken a step further to incorporate the word “little” so it now becomes “my little resident”.My. The word “my” suggests ownership. In the above example it suggests ownership over other living beings. I guess we use it most often with our children. Of course, we have cause to argue the term in that sense because we actually give birth to our children. They truly are part of us, we clothe them, we feed them, and we naturally feel we have ownership in their lives. So the question we should ask is why do we use the term so frequently when discussing Elders living in skilled nursing facilities? Is it because we have become so task-oriented as a society that we only see the tasks that must be done?I think the worst part of it all to me is I used to do it too. I can remember using terms like “my,” “still,” and perhaps the worst one of all “aww” when referring to Elders living in some of our homes. As I have grown and evolved in the person-directed-care movement, I have realized more than ever the impact of the words I use and how they leave a footprint on those around me.We are trained to see the tasks that are before us. When I started working in long term care as a nursing assistant several years ago, I was taught to look at all the tasks that needed to be accomplished. I was given “ownership” over individuals and I planned their day. At that time, healthcare for me was as ritualistic as owning a dog. Feed them, bathe them, clothe them, walk them, toilet them, and because they were “mine”, I could control all of those routines as I wanted.It was only when I began to step away from those tasks and routines that I could see more clearly. I can remember sitting in Savannah, Georgia with a WW2 hero from the skilled nursing facility I worked at during the time and realizing this person was so much more than the tasks we associated him with. I remember the day he approached me about the trip and how important it would be for him to take it. Several months later, I had learned more from my relationship with him than most people could have taught me in years. I learned that sometimes it is easy to put our expectations on others and force limitations on them that aren’t really theirs. As Murray and I made our way through the museum that afternoon, I learned the power of person directed care in its truest form. Murray, having actually survived 29 missions during WW2 into enemy territory while battling German fighter planes, was given the opportunity to lead the tour by the formal guide. He spent the afternoon telling everyone in the museum about his experiences being part of the “Bloody 100th Bomb Squad”. In one afternoon he went from merely being a “patient” in a long term care facility to a “teacher” with more experience and wisdom than any professor I had ever met.Words have vast power. They can cause us to dream of faraway places, remember passages of time that are no longer, and give us strength to face tomorrow. Knowing this, if we are to truly change the culture facing aging, we should give precedent to changing our vocabulary. So many times we seek to change physical environments and structures but give little thought to the things that we let slip out of our mouth from day to day. True change brings a true shift in the way we see things. When we view things differently, then we say things differently. When our language begins to change, then we cause others around us to have a paradigm shift as well. I think Emily Dickinson said it best when she said, “I know nothing in the world that has as much power as a word. Sometimes I write one, and I look at it until it begins to shine.” Related PostsTweetShare1ShareEmail1 SharesTags: language nursing home quality of life skilled nursing